Everything You Wanted to Know About Opioids

Find me on:
LinkedIn

At this point, many of us are familiar with the epidemic of opioid abuse in the United States. In 2016, roughly 64,000 people died from an overdose on drugs, with opioids accounting for two-thirds of body count. Since 1999, deaths related to opioid abuse have nearly quadrupled, while the number of deaths tied explicitly to fentanyl and new synthetic opioids has more than doubled in the last two years alone. These deaths now surpass the all-time highs for annual deaths caused by motor vehicle collisions, HIV, and guns. It’s safe to say that the opioid crisis from continued drug abuse constitutes a severe public health crisis.

Opioids/Opiates are a classification of drugs that act on the opioid receptors in the brain. For reference, the difference between opiates and opioids is that opiates are derived from natural opium poppy plants and include heroin, morphine, and codeine, while opioids are a broader term encompassing both natural and synthetic drugs, for example, hydrocodone, oxycodone, fentanyl, and methadone.

Opioids can be taken in some ways, including pill form, nasal spray, skin patch, suppository, intravenously, and snorted in powder form. Different types of opioids have different fat solubilities, so some are more effective when absorbed through the mucous membrane or another membrane, while others are more effective when smoked. Opioids can be short acting or long lasting, and when injected they create a rush of pleasure in the body. The drug binds to opioid receptors in the body.

How do Opioids Work?

Opioids act on the specific receptor molecules in the brain for the endorphin/enkephalin class of neurotransmitters. These neurotransmitters are associated with movement, mood, and physiological processes such as breathing, digestion, and body temperature. Typically, the body sends out endorphins and enkephalins according to when it is called upon. When taking an opioid, every endogenous opioid neuron fires at once, flooding the brain with feel-good chemicals.

Morphine derives its name from the classic Greek god of dreams, Morpheus, who was often depicted carrying a handful of poppies. Use of opiates can be traced all the way back to ancient times, where opium poppies were blended with tea to create therapeutic and recreational analgesics. The first historical reference comes to us from the ancient Sumerian society over 5000 years ago. Opium pipes have even been uncovered from archaeological sites in Asia, Egypt, and Europe, with textual references from 1000 B.C. onwards. The first major crisis of opium addiction occurred after British traders brought the drug to China and spurred a national outcry to ban the substance for creating so many addicts. The Opium Wars were fought between 1839 and 1842.

Opium use was widespread across Europe and the United States, and was a favorite ingredient in many patent medicines that would later be banned by the FDA, and was available to pretty much anyone who could afford them. Morphine was first synthesized in 1805, and after the hypodermic syringe was invented by Alexander Wood in 1853, morphine became a favorite injectable substance for use in the American Civil War, and later World War I and II. In 1898, the Bayer company, a German pharmaceutical giant discovered that adding a particular chemical into morphine made it more fat-soluble to enter the brain faster. The trade name for this new drug became heroin. Opiates were even included in children’s medicine, such as Mrs. Winslow’s Soothing Syrup for Teething Children, which contained morphine. 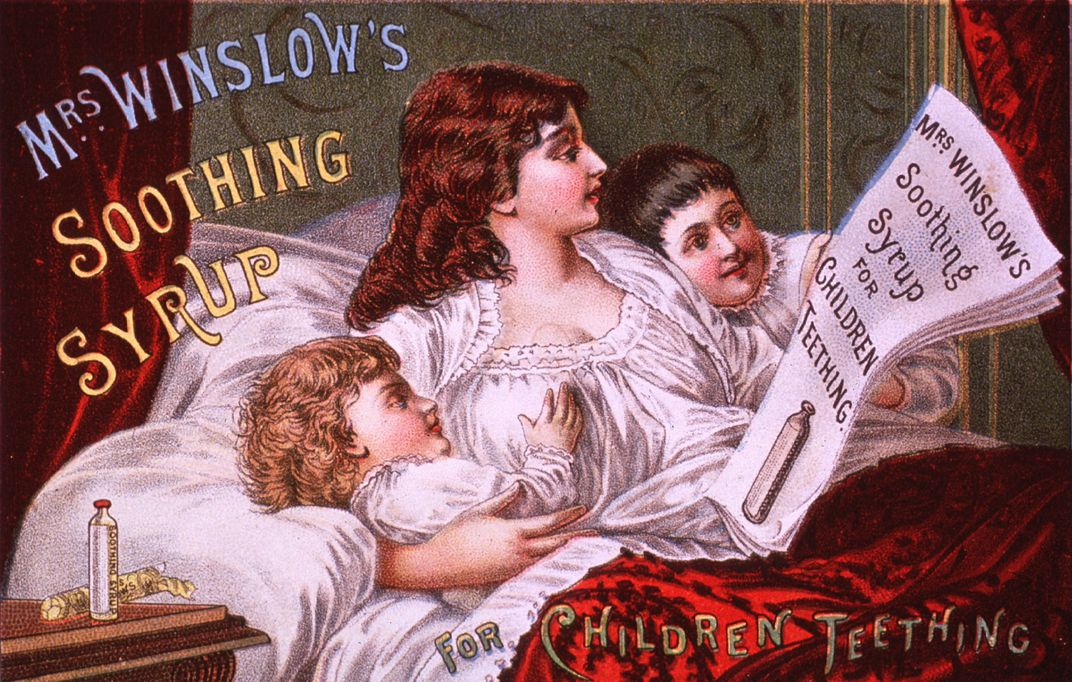 Over time usage increased and the public began to recognize the severe side effects of opioid addiction. Samuel Hopkins Adams, a muckraking journalist, published “The Great American Fraud” in Colliers in 1905, exposing the false and potentially dangerous effects of patent medicines in America. Much like today, physicians and pharmaceutical companies were the primary drivers of addiction in the populace. 19th-century surveys showed that most opiate addicts were female, white, and middle-aged, from modest backgrounds. In other words, precisely the kind of person who would seek out a physician prescription. In 1909, Congress passed the Opium Exclusion Act, which banned the importation of smokable opium into the United States. Later, the Harrison Narcotics Act of 1914 placed massive taxes on many drugs, along with requiring physician and pharmacist registration to acquire and distribute the drug. In 1916, Bayer Company ceased production of heroin in reaction to public outcry.

Acts were passed in the 20th century that banned heroin, opium, and other analgesics from being sold. However, new synthetic alternatives were often created and touted as less addictive alternatives, such as Oxycodone, which was approved by the FDA in 1950, and Vicodin, which was adopted in 1983. The Controlled Substances Act of 1970 was passed to regulate the existing narcotic/opioid market, creating the five schedules of drugs that we use today. The prescription opioid landscape expanded into the 1990s and 2000s, with the introduction of Fentanyl and Hydromorphone. By 1999, an estimated 2 percent of the population (4 million people) were using prescription drugs non-medically. The 2000s saw a rapid increase in the abuse and prescription rates for opioids, and in 2016 the opioid epidemic was deemed a public health crisis by President Donald Trump.

Yes, opioids pose a significant threat to the mental and physical health of abusers. In the prescribed dosages and consumption guidelines outlined by physicians, opiates are successful at curbing pain and helping patients recover from debilitating injuries. However, even safe prescription rates increase your chances of developing an addition. OPiate overdose can be lethal and can occur for first-time users as well as longtime users. Because of opioid receptors connected with breathing functions, ingesting opioids can shut down the user’s breathing. When this occurs, the opioid antagonist Naloxone (Commercial name Narcan) should be administered immediately. This drug knocks the opioid off the receptor and blocks it from returning.

While the buzz from opiates may sound tempting, there is an enormous price to pay. Opioids are incredibly addictive, and users who take the drug for more than a couple weeks can develop emotional dependency and undergo painful withdrawal symptoms once they stop. Using any time of opioid for prolonged periods can produce a tolerance. Experiments with animals have shown that the body conditions itself to the drug, creating a growing tolerance that requires more and more of the substance to attain equilibrium. Interestingly, when animals developed a tolerance to the drug in the same environment, moving them to a new environment and injecting the same dosage resulted in an overdose, suggesting a strange connection between internal and external conditioning effects. These effects have also been recorded in humans.

Researchers found many risk factors associated with a higher potential for opiate abuse while being prescribed the medication. Some of the most prominent include:

Since 2012, opioid prescriptions have steadily declined, but during the mid-2000’s the rate had soared and peaked in 2012. We can ascribe a certain amount of responsibility to private insurance and Medicare, which accounted for most spending on opioid prescriptions. Medicare’s share of expenditures rose from $135 million in 1999 to nearly $648 million in 2012, adjusting for inflation. Opioid spending by age group for Medicare and Medicaid recipients were highest for those under the age of 65.

Opioid withdrawal can occur within hours of the last dosage depending on the addict’s situation. The first signs are usually watery eyes, runny nose, yawning, and sweating. Restlessness and irritability accompany these, along with a loss of appetite. As withdrawal peaks, the user suffers from diarrhea, shivering, sweating, cramps, muscle cramps, and increased sensitivity to light and pain. Insomnia and general malaise are also frequent. The symptoms have been described as similar to the flu, and these physical symptoms can last for a few days to a week.

The more difficult trouble in opiate withdrawal is the longer lasting mental symptoms. This portion of withdrawal can last for weeks, to months, to years, and are characterized by a general lack of purpose, depression, lousiness, and malaise. This could be a result of endorphin production needing time to recover, but could also be caused by a lack of some meaningful activity to replace the drug use. Recovering addicts also face intense cravings that can last for months after initial withdrawal, and usually causes a relapse. The parts of the brain responsible for seeking reward are used to a certain level of artificial stimulation that when the substance is removed, it immediately begins firing off the neurotransmitters responsible for anxiety, stress, and panic.

The following testimonials on opiate withdrawal were gathered from the Bluelight forum and the views expressed are in no way affiliated with Landmark Recovery:

“You may be able to get rid of your anxiety with smoking or drinking or downers however that feeling of dying, your skeleton trying to jump out of your body and your skin crawling will not stop. You have a few choices: Suboxone, Wean off the drug, or cold turkey. Opiate withdrawal left me feeling dead day one then late day two and it got worse and worse till I wanted to cut myself and die. Suboxone works very very well, and you only need a small dose like 2 mg a day. I used to take 16mg a day, and I weaned down now to 8mg a day, and I'm fine I plan to go to 2mg a day.”

“You'll get brain flashes, nerve ending tweaking in your face, on your lips, hot flashes, hot flashes last a few days to a week, usually, for my wife and me. The uncomfortable feeling something eating away at you inside, sick to your stomach. Then the mental game, RLS, insomnia.”

“The third day of withdrawal is almost a shorthand amongst addicts for the absolute depths of pain and despair. Day 3 was hell itself. Near constant diarrhea, agonizing pain, migraine-like headaches, photophobia, suicidal ideation, the sensation of skin burning, complete lack of temperature regulation and a near-psychotic mental state. If you had presented with me with a loaded gun on Day 3, I would have put it in my mouth.”

Medical professionals highly suggest that if you attempt to withdraw from opioids, it not be done suddenly or cold turkey. The side effects of withdrawal are powerful enough to leave you debilitated, but could also drive you to relapse and possible overdose. Medication assisted recovery using medications such as anticonvulsants, antidepressants, digestion regulators, and opioid agonists are helpful in mitigating the risk of death. The following drugs have seen degrees of success in helping opiate addicts to taper off their addictions successfully.

Suboxone is a prescription medication used for the treatment of opioid addiction. It is a combination of two different drugs: buprenorphine (a partial opioid agonist) and naloxone (an opioid antagonist), and helps to reduce withdrawal symptoms and cravings while preventing misuse.

Buprenorphine, while used as a part of Suboxone, can also be administered by itself. Buprenorphine works with the same opioid receptors that heroin affects, but it is limited and not nearly as potent. Buprenorphine is effective for withdrawal and cravings

Methadone is more widely known than buprenorphine, but it works in the same fashion. Methadone use is controversial because, when used excessively, it can cause a build up in the body, making overdose a more likely outcome. Methadone users run the risk of becoming addicted.

Drug and alcohol addictions are some of the most destructive forces in the world today. The process of healing ourselves, our families, our communities, and the world at large, starts with recognizing the danger that these substances represent. At Landmark Recovery, we believe in creating a supportive network of love with access to resources that can help you break free from the chains of addiction. Visit our website to learn more about our drug and alcohol recovery centers.