Find me on:
LinkedIn

Prescription drug abuse is one of the most serious issues facing the United States. According to the latest survey on substance use by SAMHSA, among people 12 years or older there are currently 3.3 million individuals who are currently misusing prescription pain relievers. Of these people, 6 out of 10 indicated that the main reason they misused pain relievers was to alleviate physical pain and more than half indicated that they had obtained the last pain relievers they misused from a relative or friend. It is difficult for the nation to combat this problem, as many individuals do require pain management medication in order to get through serious injuries or chronic pain. However, too many Americans wind up hooked on these medications and the burgeoning black market has allowed drug cartels to fill the demand with a cheap alternative, often in the deadly form of heroin or fentanyl. 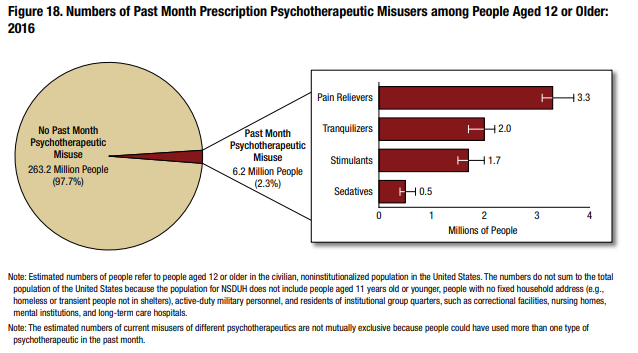 The National Survey on Drug Use and Health categorizes prescription drugs according to four categories: pain relievers, tranquilizers, stimulants, and sedatives. These all fall under the umbrella term of psychotherapeutic drugs. It is estimated that 6.2 million Americans have misused prescription medication drugs in the past month, or 2.3% of the 12 and older population.

While prescription pain relievers come in many forms, the most common prescription for relieving immense or chronic pain are opioids. Opioids/Opiates are a classification of drugs that act on the opioid receptors in the brain. Opiates are derived from natural opium poppy plants and include heroin, morphine, and codeine, while opioids are a broader term encompassing both natural and synthetic drugs, for example, hydrocodone, oxycodone, fentanyl, and methadone. Opioids can be taken in numerous ways, including pill form, nasal spray, skin patch, suppository, intravenously, and snorted in powder form. Different types of opioids have different fat solubilities, so some are more effective when absorbed through the mucous membrane or another membrane, while others are more effective when smoked.

Pain reliever abuse in the United States is most commonly found among individuals using opioids such as Vicodin (hydrocodone) and OxyContin (oxycodone). Pain reliever misuse is highest among the age group of 18 - 25 years old. This age demographic also reports the highest rates for heroin use as well. Fentanyl, a potent opioid responsible for the majority of overdose deaths in 2016 was misused by more than 228,000 individuals in that year. There are more than 3.3 million individuals in the United States currently misusing prescription pain relievers. Of those who report misusing prescription pain relievers, the majority report using them to relieve physical pain (62.3%). However, many report other reasons, such as to relieve tension (10%), help with sleep (3.3%), and to get high (12%).

Stimulant drugs are used for a variety of medical and recreational purposes. Medically, stimulants are used to treat ADHD and are intended to raise alertness and attention, as well as increase blood pressure, heart rate, and breathing. Recreationally, stimulants are taken to achieve high alertness, energy, and intense feelings of euphoria. Prescription stimulants come in a variety of forms, including amphetamines, pseudoephedrine, and amphetamine analogs. An estimated 1.7 million people aged 12 or older misused prescription stimulants. According to data from the National Institute on Drug Abuse, rates of emergency room visits for stimulants have been steadily increasing over the last twenty years. In 2012, there were nearly 360,000 people receiving treatment for some form of stimulant addiction. Stimulant use disorder occurs when someone experiences significant impairments to their life, as defined in the Diagnostic Statistical Manual, while recurrently taking stimulant drugs. In 2016, an estimated 540,000 people over the age of 12 qualified for a stimulant use disorder, representing 0.2% of the population.

The Kroger company recently announced a partnership with EVERFI intended to provide high school students with education about drug abuse prevention. Known as the Prescription Drug Safety Network, this program equips students with the knowledge and skills to make safe decisions with prescription medications. The program utilizes a digital learning platform to present students with evidence-based, public health guidelines to empower safer decisions surrounding prescription drug usage. Students are walked through scenarios and self-guided activities, learning how to properly use and dispose of drugs as well as what to do when presented with the option to misuse them. Kroger plans on expanding the program to classrooms in Atlanta, Dallas, Houston, Lansing, Lexington, Louisville, Memphis, Nashville, and Phoenix.

"We have to work together to identify a long-term solution to the prescription drug abuse epidemic our country is experiencing. In America, 78 people die each day from opioid overdose and another 20.8 million have a substance use disorder. Kroger is committed to offering resources in our stores, pharmacies, and communities to be a part of the solution. This preventive education program is just one more way we are helping people, including our youth, lead healthier lives." - Colleen Lindholz, president of Kroger Pharmacy and The Little Clinic.

Currently, the program is underway in Cincinnati, Ohio, where more than ten schools across the state have participated. Students have increased their understanding by an average of 49% according to pre and post-program assessments. 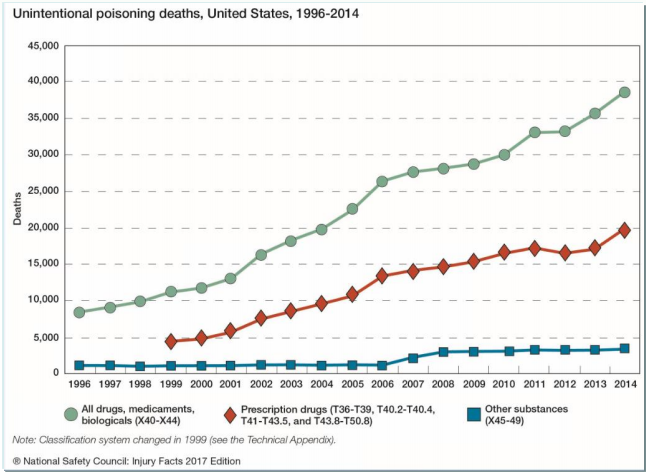 This data, collected by the National Safety Council demonstrates how the number of overdose fatalities has increased across the board for all forms of narcotics in the United States, especially prescription drugs. At least 217 workers passed away from a drug overdose while at work in 2016, a startling number that actually rose 32% from the year prior. In fact, every year since 2010 has seen a steady increase in on-the-job overdose deaths. The NSC commissioned a survey of U.S. employers to find out how they view the impact of prescription drug abuse in the workplace. According to the survey results:

It is promising to hear that the majority of employers would like to support employees returning to work after going through treatment. If employers encouraged their workforce to be forthcoming about substance dependency, we could offer better treatment and reach the individual with a substance use disorder faster. Employers need to recognize the impact that prescription drug misuse can have on the workplace and put strong policies into place that encourage people to seek treatment, reduce penalties for drug use, and train staff on spotting and reporting signs of abuse.

One’s career can be a large determining factor when it comes to the development of a substance use disorder (or SUD). High stress, long working hours, and a demanding field can all drive someone to drink or consume drugs as a means of coping. Unfortunately, two of the most heavily afflicted career fields when it comes to substance addiction are the construction and mining industries. The workforce for these industries typically comes from a low education and household income background, and both fields involve strenuous physical labor, long hours, and unsafe working conditions.

According to the Substance Abuse and Mental Health Services Administration, both mining and construction experience some of the highest rates of substance abuse of any industry within the United States, skewing well above the average. This statistic is particularly disconcerting when you consider the relative dangers involved in both construction and mining as well as the necessity of our laborers to create an infrastructure that meets safety standards.

Data shows that alcohol usage and overall rates of substance use disorders are higher in the construction and mining industries than most others. Similarly afflicted fields of work are food services and the arts, entertainment, and recreational fields. For construction workers, the statistics are certainly outside the average.

The construction industry, in particular, is heavily affected by the abuse of narcotics. The industry has the second highest rate of pain medication and opioid misuse following the entertainment and recreation industry. Roughly 1% of construction workers are thought to be addicted to opioids, which is near twice the addiction rate for all working adults in the United States.

Adolescents and young adults report the highest rates of nonmedical use of prescription drugs, with 4.6% of 18-25-year-olds reporting nonmedical use in the past month. The National Institute on Drug Abuse found that 6% of high school seniors had used the prescription stimulant Adderall within the past month, and 2% had used Vicodin. Adolescents and young adults who report misusing prescription medications are also more likely to report the use of other drugs, with studies confirming higher rates of cigarette smoking, episodic drinking, marijuana, cocaine, and illicit drug use.

Drug and alcohol addictions are some of the most destructive forces in the world today. Prescription drug addiction is an especially menacing premise because so many Americans trust and rely on their healthcare providers to give them exactly what they need, when they need it. Unfortunately, many patients wind up inadvertently hooked on medication that causes their lives to spiral out of control. The process of healing ourselves, our families, our communities, and the world at large, starts with recognizing the danger that these substances represent. At Landmark Recovery, we believe in creating a supportive network of love and access to resources that can help you break free from the chains of addiction. Visit our website to learn more about our drug and alcohol rehabilitation centers.